What Women Need to Know about Alcohol

What Women Need to Know about Alcohol

Men have higher rates of alcohol-related hospitalizations than women, and more than 75% of deaths from excessive drinking are males. 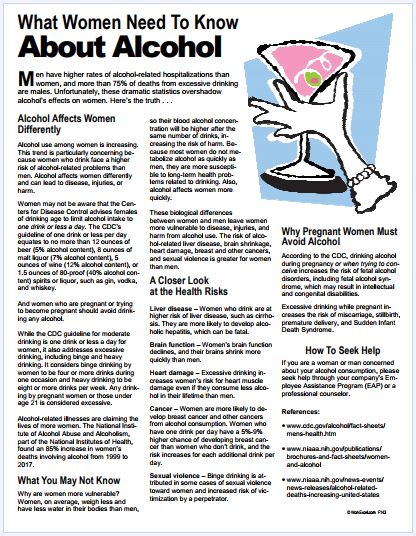 DOWNLOAD THE PDF ONLY HERE (INSTEAD OF THE ZIP PKG.)

Alcohol use among women is increasing. This trend is particularly concerning because women who drink face a higher risk of alcohol-related problems than men. Alcohol affects women differently and can lead to disease, injuries, or harm.

And women who are pregnant or trying to become pregnant should avoid drinking any alcohol.

What You May Not Know

Why are women more vulnerable? Women, on average, weigh less and have less water in their bodies than men, so their blood alcohol concentration will be higher after the same number of drinks, increasing the risk of harm. Because most women do not metabolize alcohol as quickly as men, they are more susceptible to long-term health problems related to drinking. Also, alcohol affects women more quickly.

These biological differences between women and men leave women more vulnerable to disease, injuries, and harm from alcohol use. The risk of alcohol-related liver disease, brain shrinkage, heart damage, breast and other cancers, and sexual violence is greater for women than men.

A Closer Look at the Health Risks

Liver disease – Women who drink are at higher risk of liver disease, such as cirrhosis. They are more likely to develop alcoholic hepatitis, which can be fatal.

Heart damage – Excessive drinking increases women’s risk for heart muscle damage even if they consume less alcohol in their lifetime than men.
Cancer – Women are more likely to develop breast cancer and other cancers from alcohol consumption. Women who have one drink per day have a 5%-9% higher chance of developing breast cancer than women who don’t drink, and the risk increases for each additional drink per day.

Sexual violence – Binge drinking is attributed in some cases of sexual violence toward women and increased risk of victimization by a perpetrator.

Why Pregnant Women Must Avoid Alcohol

How To Seek Help

If you are a woman or man concerned about your alcohol consumption, please seek help through your company’s Employee Assistance Program (EAP) or a professional counselor.

The Editable and Brandable, Free Tip Sheet Is Above. Click here for the media product:

PowerPoint and Products for this Tip Sheet

Drug and Alcohol Training for Employees

Drug and Alcohol Training for Supervisors

Get a free trial and information about Frontline Employee EAP Newsletter