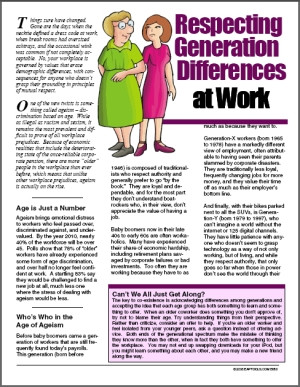 First 100 Words
Things sure have changed. Gone are the days when the necktie defined a dress code at work, when break rooms had oversized ashtrays, and the occasional wink was common if not completely acceptable. No, your workplace is governed by values that erase demographic differences, with consequences for anyone who doesn’t grasp their grounding in principles of mutual respect.

One of the new twists is something called ageism – discrimination based on age. While as illegal as racism and sexism, it remains the most prevalent and difficult to prove of all workplace prejudices. Because of economic realities that include the deteriorating state of the once-reliable corporate pension, there are more “older” people in the workplace than ever before, which means that unlike other workplace prejudices, ageism is actually on the rise . . .

When To Use
“Ageism” and its cost; attitudes and values of different generations-- boomers, X, Y and beyond; why we can’t get along, and how to start making it happen.

How to Use
Conflict resolution, individual sessions, brown-bag seminars.