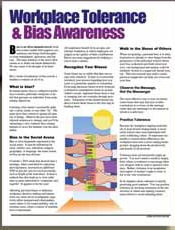 First 100 Words
Bias is an often misunderstood word that comes loaded with negative connotations and brings forth thoughts of close-mindedness, ignorance, and bigotry. The mere mention of the word often causes us to shake our heads defensively. No one wants to be thought of in these terms. But a closer examination of bias reveals a tendency common in all of us.

In human terms, bias is a subjective preference toward a particular viewpoint or belief that prevents an individual from maintaining objectivity. Carrying a bias doesn’t necessarily make one a racist, sexist, or any other “ist.” Humans have bias toward or against all manner of things. Observe the pervasive institutional resistance to change, and you’ll be witnessing a very common bias causing humans to favor the familiar over the unfamiliar . . .

When To Use
Bias is a misunderstood term. We all have biases; awareness and tolerance; bias in the social interaction of the workplace; recognizing one’s bias; walking in another’s shoes.

How to Use
Counseling sessions; waiting rooms.