What Everyone Should Know about Fentanyl Poisoning

What Everyone Should Know about Fentanyl Poisoning 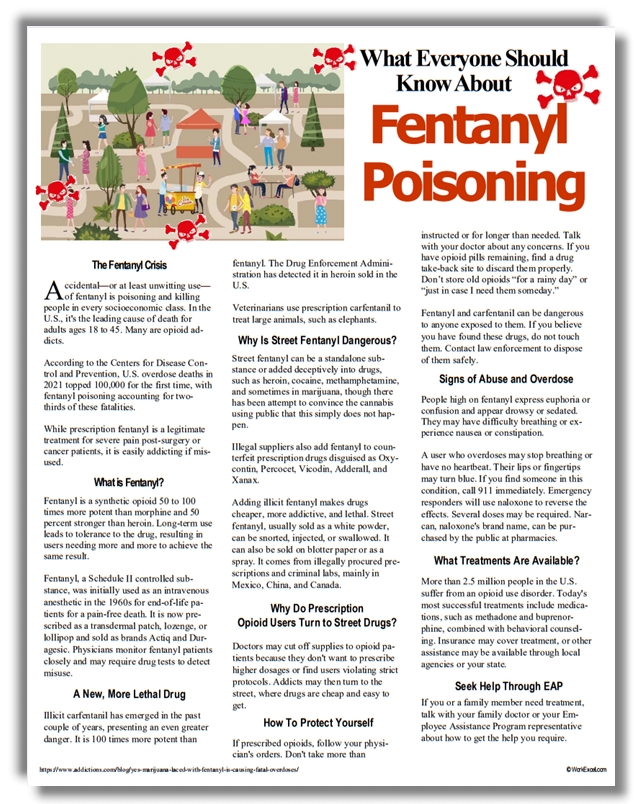 The accidental use and overdose of fentanyl is poisoning and killing people in every socioeconomic class. In the U.S., it’s the leading cause of death for adults ages 18 to 45.

According to the Centers for Disease Control and Prevention, U.S. overdose deaths in 2021 topped 100,000 for the first time, with fentanyl poisoning accounting for two-thirds of these fatalities.

While prescription fentanyl is a legitimate treatment for severe post-surgery pain and for cancer patients, it is easily addicting if misused.

Fentanyl is a synthetic opioid 50 to 100 times more potent than morphine and 50 percent stronger than heroin. Long-term use leads to tolerance to the drug, resulting in users needing more and more to achieve the same result. Dependency can be rapid.

Fentanyl, a Schedule II controlled substance, was initially used as an intravenous anesthetic in the 1960s for end-of-life patients for a pain-free death. It is now prescribed as a transdermal patch, lozenge, or lollipop and sold as brands Actiq and Duragesic. Physicians monitor fentanyl patients closely and may require drug tests to detect misuse.

Illicit carfentanil has emerged in the past couple of years, presenting an even greater danger. It is 100 times more potent than fentanyl. The Drug Enforcement Administration has detected it in heroin sold in the U.S.

Veterinarians use prescription carfentanil to sedate large animals, such as elephants.

Why Is Street Fentanyl Dangerous?

Street fentanyl can be sold as a stand-alone substance or secretly added to other drugs, such as heroin, cocaine, methamphetamine, and sometimes marijuana (although online disinformation has sought to convince cannabis users that this does not happen and that the concern is unwarranted).*

Adding illicit fentanyl makes drugs cheaper, more addictive, and lethal. Street fentanyl, usually sold as a white powder, can be snorted, injected, or swallowed. It can also be sold on blotter paper or as a spray. It comes from illegally procured prescriptions and criminal labs, mainly in Mexico, China, and Canada.

Why Do Prescription Opioid Users Turn to Street Drugs?

Doctors may cut off supplies to opioid patients because they don’t want to prescribe higher dosages or find users violating strict protocols. Those with addictions may then turn to the street, where drugs are cheap and easy to get.

How to Protect Yourself

If prescribed opioids, follow your physician’s orders. Don’t take more than instructed or for longer than needed. Talk with your doctor about any concerns. If you have opioid pills remaining, find a drug take-back site where you can discard them properly. Don’t store old opioids “just in case” you need them again someday.

Fentanyl and carfentanil can be dangerous to anyone exposed to them. If you believe you have found these drugs, do not touch them. Contact law enforcement to dispose of them safely.

Signs of Abuse and Overdose

People high on fentanyl express feeling euphoria or confusion and appear drowsy or sedated. They may have difficulty breathing or experience nausea or constipation.

A user who overdoses may stop breathing or have no heartbeat. Their lips or fingertips may turn blue. If you find someone in this condition, call 911 immediately. Emergency responders will use naloxone to reverse the effects. Several doses may be required. Narcan, naloxone’s brand name, can be purchased by the public at pharmacies.

What Treatments Are Available?

More than 2.5 million people in the U.S. suffer from an opioid use disorder. Today’s most successful treatments include medications, such as methadone and buprenorphine, combined with behavioral counseling and group support, including 12-step programs. Insurance may cover treatment, or other assistance may be available through local agencies or your state.

If you or a family member need treatment, talk with your family doctor or your employee assistance program representative about how to get the help you require.