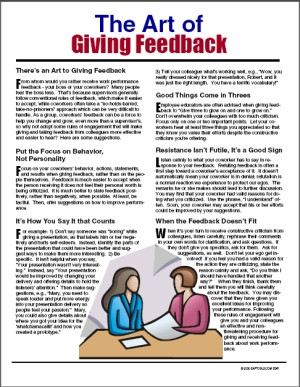 First 100 Words
From whom would you rather receive work performance feedback - your boss or your coworkers? Many people fear the boss less. That’s because supervisors generally follow conventional rules of feedback, which make it easier to accept, while coworkers often take a “no-holds-barred, take-no-prisoners” approach which can be very difficult to handle.

As a group, coworkers’ feedback can be a force to help you change and grow, even more than a supervisor’s, so why not adopt some rules of engagement that will make giving and taking feedback from colleagues more effective and easier to hear? Here are some suggestions. Focus on your coworkers’ behavior, actions, statements, and results when giving feedback, rather than on the people themselves . . .

When To Use
The art of giving feedback to others; focusing on behavior, not personalities; what to say, how you say it; the sandwich technique; when others resist; when feedback doesn’t fit; keeping egos out of feedback.