Due to inaccurate in formation and mistaken beliefs about alcoholism or addictive disease, people who are close to the addict (alcoholic) "enable." It is important to explain this concept to supervisors in reasonable suspicion training.

With almost no awareness, both employees and supervisors alike enable--not because they want to protect and cover up for the addict--but because they hold beliefs about alcoholism and substance abuse that dictate their response to the disease and its associated behavior. Once most people truly understand the disease, they become "deadly forces" for the addiction's progression and unstoppable trains that can detach and easily precipitate crises that prompt the addict to access treatment. 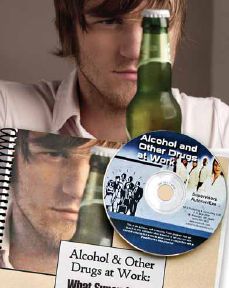 Enabling at work is behavior exhibited by coworkers or supervisors that helps the addict not realize or face the consequences of his/or her problem behavior resulting directly or indirectly from the alcohol or drug use. Enabling does more than prevent accountability. It also reinforces the definition of addiction or alcoholism held by the drinker or drug user, which does not include themselves.

Enabling typically appears as the "right" thing to do in response to the problem behavior but helps the alcoholic or addict escape responsibility for actions or problematic events. The ability of the addict to deny, rationalize, externalize, and minimize problems while having others accept excuses and explanations helps the addict get sicker.

Enabling may be so well accomplished that the alcoholic or addict may appear as a person with no problems. When behaviors problematic of the illness emerge, the role of the enabler and their beliefs about the addict are confronted. At this moment, there is a strong reflex to refer to the addict as a "functional alcoholic."

So, in the earliest stages of addictive disease, the alcoholic or addict could be perceived as the most competent, well-liked, and socially accepted worker in the organization. As addictive disease grows worse, problems follow --- and enabling increases.

The alcoholic's past history of job success without problems may span decades. This keeps managers unsuspecting of an alcohol or drug problem. Reasonable Suspicion Training must help managers see that problems at home are often much more severe than they appear at work. This lack of knowledge by DOT supervisors contributes to enabling. They will easily accept and believe some other problem explains job performance issues. These problems are often symptoms of the primary addiction of course. Supervisors or coworkers are easily led or manipulated to excuse, help, make-up-for, or in other ways support and protect the addicted worker. These enabling patterns can occur in the face of late-stage addiction, such as alcohol on the breath, erratic and disturbing mood swings, and obvious withdrawal symptoms. 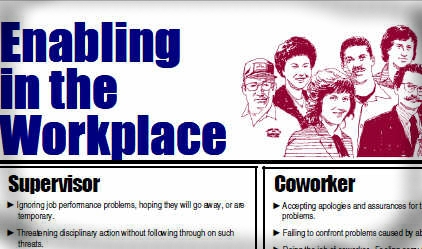 Eventually the enabling behavior becomes so automatic and institutionalized in the company, that only a crisis will break the pattern. Often this crisis is one that causes extreme embarrassment, financial loss, or other cost to the organization. Unfortunately, the response to such crises is often termination or transfer at great (additional) expense to the organization. The loss of a potentially valuable employee is the real tragedy, who has for years been enabled to reach the later stages of the disease without effective intervention.

Sometimes medical retirements are arranged for workers who have become too ill to function or indeed near retirement. When this happens, the life span of such employees is often shortened, due to uncontrolled drinking supported by a fixed income with ensuing problems at home, especially medical problems.

A decrease in the alcoholic’s urgency for treatment will follow any disability retirement arrangement, and an increase in medical and social dysfunction will accompany the financial independence the sick alcoholic now enjoys.