DOT supervisor training for reasonable suspicion must cover stimulants as a drug class. This does not include coffee of course, but medications and illicit drugs, especially drugs like cocaine.

Cocaine may be snorted, smoked, or injected. It is likely that very view DOT supervisors have ever witnessed direct use of Cocaine on the job. But there are signs and symptoms for DOT supervisors to learn in a DOT Compliance training class that will help them spot possible use or at least its immediate aftereffects.

In DOT Supervisor training, be sure to discuss the history of cocaine's use so supervisor gain an appreciation for the power of this drug to affect the workplace. And the history of it ascendancy. Cocaine was first used as an anesthetic in eye surgery in the 1880's. It constricts blood vessels while providing a 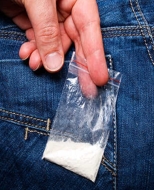 topical anesthetic.Softer drugs eventually made it obsolete.Novocain was one such drug. Cocaine is often diluted with a variety of substances before being sold. This could be almost any inert white powdery substance. Some of these substances can produce serious side effects to the body and central nervous system.

Smoking, injecting, or snorting cocaine produces a rapid onset of effects that should be included DOT supervisor training. Cocaine is often used in a binge fashion with consequent depression following the "rush" period.This may force the user to administer the drug every few hours until it is depleted, or until physical or mental exhaustion is reached. DOT Supervisor Training can benefit from a classroom discussion on what behavioral signs and symptoms my be exhibited under such circumstances.

All other interests during this state become secondary to use of the drug -- even job security.

And here is where DOT supervisor training can be particularly effective in reducing risk to the organization.

Supervisors should be educated to be suspicious of unannounced absenteeism in an employee who appears well the day prior to being absent. This does not mean the supervisor should start diagnosing employees. However, these subtle behaviors may be clues that save the life if they can lead to preponderance of evidence that the employee is under the influence. DOT supervisor training should therefore consider other behavioral signs and symptoms that can help support a request for testing as a result of reasonable suspicion.

DOT supervisor training should help supervisors be aware of the side effects of cocaine use. These may include dizziness, tremors, headache, flushed skin, chest pain with palpitations, constant sniffing/snorting, excessive sweating, vomiting and cramps. The psychological impact of cocaine use that supervisors must learn in DOT supervisor training are agitation, hostility, panic, aggression and suicidal or homicidal tendencies.Paranoia is not uncommon.Cardiovascular collapse may precede accidental death.

A workplace wellness program on cocaine abuse education can be found here.