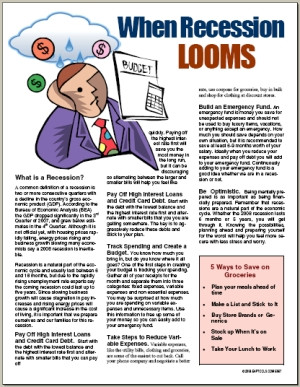 First 100 Words
In early December, the government announced that we’ve been in a recession for the past year. A common definition of a recession is two or more consecutive quarters with a decline in the country’s gross economic product, but you probably didn’t need to do any number crunching to know that the economy has been slipping.

Although recession is a natural part of the economic cycle, this one has been particularly rough as crashing home values and the resulting credit crunch have created a crisis of confidence that has sent consumer confidence plummeting and left investment portfolios in tatters. Recessions typically last somewhere between 6-18 months, but no one knows for sure how and when we'll recover from the current downturn . . .

When To Use
Everybody’s worried. Here is what to do. Here’s tips for paying off debts, saving money, tracking spending, and reducing expenses--all with the goal of reducing worry!

How to Use
Clients sessions, health fairs, workshops.