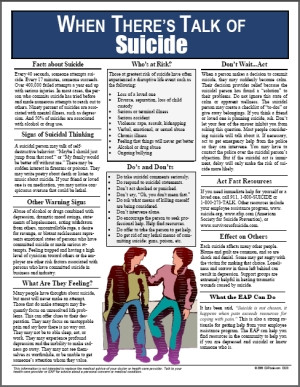 First 100 Words
Every 40 seconds, someone attempts suicide. Every 17 minutes, someone succeeds. Over 400,000 failed attempts a year end up with serious injuries. In most cases, the person who commits suicide has tried before and made numerous attempts to reach out to others. Ninety percent of suicides are associated with mental illness, such as depression. And 50% of suicides are associated with alcohol or drug use.

A suicidal person may talk of self-destructive behavior: “Maybe I should just jump from that roof.” or “My family would be better off without me.” There may be sudden interest in firearms or poisons. They may write poetry about death or listen to music about suicide . . .

When To Use
Understanding suicide facts, risks, and prevention. Dos and don'ts, taking action, helping a friend.

How to Use
Counseling sessions, health fairs, waiting rooms.